In Sanchez Bayo´s work continuous references to death, fear, or the sinister through lack of light can be easily identified. A hard stroke and dark palette, which moves between grey, white spotted and black are the dominant features.

In terms of composition and thematic, the use of the color with a tenebrist sense is emphasized, contrasting shades and images religiously influenced, or dogs as protagonists. The latter are always menacing, powerful dogs of a considerable size, with an expressive and naturalistic expression. 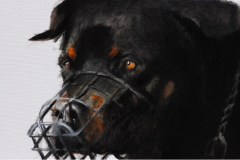 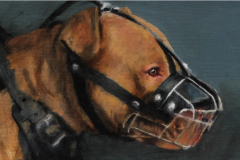