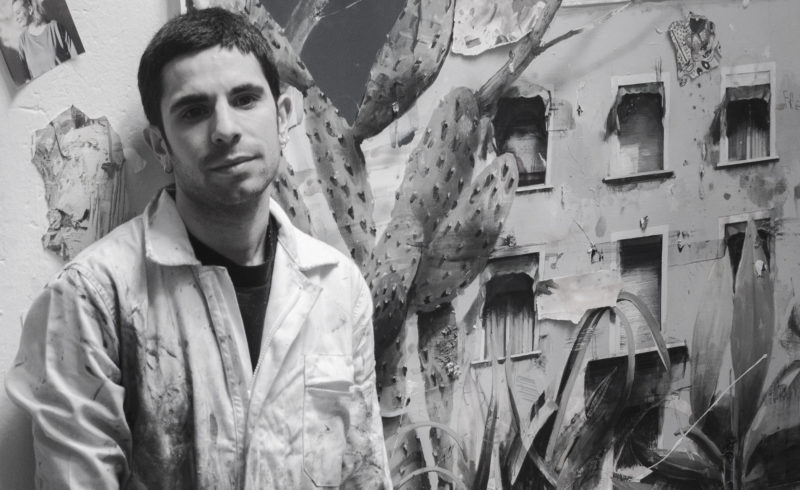 The childhood and adolescence of Francisco Mayor Maestre in Rivas-vaciamadrid was marked by daily trips to the capital in which he observed the changes in the landscape and the margins of the city. Faced with the excessive urbanization and real estate speculation, Mayor Maestre is attracted by the contrast between those gray working-class buildings, with their identical and impersonal structures, and those small touches of color and personality that can be glimpsed as manifestations of the people who live inside. Curtains, blinds, flags, become, in the artist’s mind, a protest against monotony, a claim to individuality and a manifestation of human kind’s relationship with the landscape and the environment.

His painting transforms the cold facades with splashes of color, overflowing vegetation and impossible planes, bringing the hidden to the forefront. Even those patterns that seem to escape figuration, take us halfway between interior decoration -a wall paper- and street art -one more way of decorating the building, albeit from the outside-. He sees the elements that reflect the lives of people and break the monotony of the facades as an accidental act of resistance. The act of living and leaving a mark becomes the greatest achievement and those little touches of individuality manifest as an unconscious act of creation. The search for aesthetics.

The freedom that can be found in these approaches and in the practice of painting itself, together with the intrinsic mystery that the artist finds in them, becomes his main theme. His analysis and experimentations revolve around the limitless exploration of spaces and materials in painting, of the difference between painting -a seemingly easy act, innate for many- and creating a work of art -a process of reflection with a goal that. is subject to a whole series of professional and even academic expectations-. He argues that painting is an exercise in image construction that is the result of the artist’s praxis and the formal aspects of the medium and plastic elements used intervene it, in addition to the ephemeral and ever-changing nature of the image. Its purest and most sincere moment is when it is being created, an understanding that is only available to the artist and that will not be contemplated again.

Francisco Mayor Maestre got his bachelor’s degree in Fine Arts at the Complutense University of Madrid, with Research Masters in Art and Creation at the same University and in Engraving and Graphic Design at the Castilla-La Mancha University. He has also been awarded the Pilar and Joan Miró Foundation Grant from Mallorca, the Art Engraver Grant from the Currency Department of the National Mint and Stamp Factory and the first prize from the Rivas-Vaciamadrid National Painting Competition (2019), among others. His work has been exhibited in various cities in Spain, in addition to Germany, the United Kingdom, Switzerland and Belgium, and is part of the Pilar i Joan Miró Foundation, the Museum of Contemporary Spanish Engraving in Marbella, the National Library, the Calcography Museum of the Royal Academy of Fine Arts of San Fernando, the City Council of Rivas-Vaciamadrid, the Museum of the Royal Mint, the Faculty of Fine Arts at the Complutense University, as well as several private collection.